Heirs from New Zealand and California meet on the Valdes Peninsula in Patagonia, Argentina 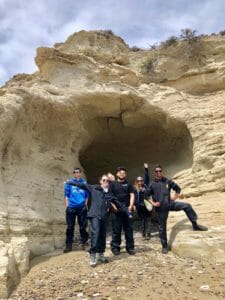 From Baylee Ashby of New Zealand:

I felt honoured to be offered the opportunity to go to Valdes Peninsula in Patagonia, Argentina, and to represent Heirs To Our Oceans (H2OO) there.  This was my first time representing H2OO on an excursion and I was privileged doing so alongside Rakau and the other Heirs.

It was an amazing experience and I got to do things that I have never done before like spending the day with elephant seals and Penguins. Being still for long periods of time observing what was around me was really interesting.  I enjoyed learning how to imitate the elephant seals in order to be able to move closer to them.

I enjoyed living alongside the local scientists and visiting scientists like Dr. Ingrid Visser from New Zealand and learning what they do.

What I noticed is that we need to keep the oceans and the beaches clean.  I saw a sea lion with a plastic strap around its neck and there was nothing we could do. It would die…this is sad!

I would like to know more about Ngati Kuri’s (my tribes) connection to seals as they are our symbol animal. I also what to know more about my local iwi/ tribes thoughts and views on our environment so I can share this knowledge with others when I travel.

My personal goal is to grow in confidence in my ability to write and speak in front of others so that I can share my ideas and learn more from those around me. (as my first language is not english)

I would like to say thank you to H2OO for giving me this experience and I look forward to continuing to grow in this space into the future.

From Miguel Mendez of California:

As I was given the insane offer to travel to Patagonia, Argentina, my heart dropped. I immediately thought “this is not real”.  Traveling to a new country was a little nerve-racking, especially without my parents. As I get on the plane to Atlanta, I said to myself  “here we go 15 hours of traveling”.  I wasn’t looking forward to the plane rides, especially because I can’t sit still for long periods of time.  As I sat on the plane, I realized that it wasn’t as bad as I thought it would be. Getting on an international plane for the first time was a wow moment… because it was… packed!

As I arrived in Argentina the line for customs is very long, and it nearly took two hours just to get by the very irritating security! My first impressions of Argentina – well, I should say Buenos Aires was that it smelled bad! Coming from the fresh smell of redwood trees to the polluted air of Buenos Aires was terrible. Once I arrived at the magical place of Peninsula Valdes it felt like home, where the air quality was much better than the polluted air in Buenos Aires.

As we drove from Trelew to Estancia where we would stay, Ernestina Gabriel taught me some accents that Argentinians have because, even though I am a Spanish speaker, there were moments where I didn’t know what they were trying to say. 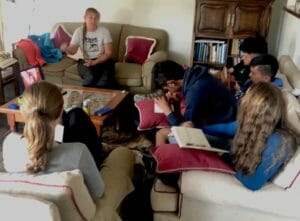 The Estancia La Ernestina where we stayed was such a beautiful place with amazing local food, the best food I’ve ever had!  Staying there for a week with top-tiered scientists was just so unbelievable. Waking up to the amazing view of the beach was so special. My time at Patagonia was filled with so many surprises and unique experiences that other people don’t have the chance to have.

The most unexpected things happened — we saw a huge male elephant seal and we were laying right next to it! That was very unforgettable. Not a lot of people get to have this experience so I feel very blessed. That same day in the afternoon we got on the rooftops of jeeps and went to go see penguins! This was my first time seeing penguins! It was a very special moment because people see penguins in the zoo or in some type of captivity center where penguins aren’t themselves. People don’t often see them in their natural habitat. I did though, and I’m very blessed for this dream trip. 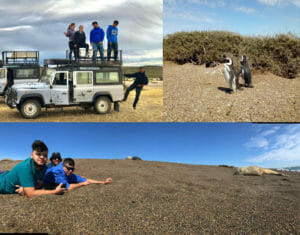 While I was there, a scientist, Dr. Ingrid Visser from New Zealand, was putting in data from the past 15 years. The data was collected about the many orca attacks on elephant seals. As I see them stress out about not finishing inserting the data, I felt like if I were in their shoes I would be too because I get stressed whenever I feel like I’m not going to finish something on time. Participating in this wonderful, magical, amazing trip has helped me understand what it takes to be a marine biologist. Dr. Visser helped me to understand that not only marine animals but any kind of animal are different when they’re in captivity. As a member of Heirs To Our Oceans, I want to persuade people to study marine biology, and I want to know more about it myself.

I want to thank all those involved for this opportunity and support. I am very grateful for having the chance to travel to Peninsula Valdes, Chubut, Patagonia, Argentina. Since returning from the trip to Argentina, I have recognized the positive aspects of my life and I am grateful for the support of this organization and from my family. 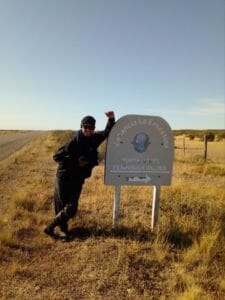 What another amazing adventure!  We explored the wilderness of Patagonia in Argentina.  We learned about orcas from New Zealand’s Dr. Ingrid Visser and other researchers. Every day the local orca expert Juan would take us out on adventures from riding on top of his jeep to observing elephant seals.

Patagonia is a beautiful place.  The experience changed my vision of life.  Looking into the eyes of a giant seal reminded me of my purpose and that is to make a change and encourage more to do the same. I was so close to the seal it sneezed and flicked pebbles on me.  I learnt from Dr. Visser that there is a cell in the brains of whales and dolphins that is the same as a cell found in human brains that triggers the emotion and social part of the mind. I personally agree after having watched the behaviour of orcas in captivity and comparing it to the behaviour of orcas in the wild in NZ.  There are 33 recorded orca attacks on humans…but only in captivity, none in the wild! Patagonia is well known for orca attacks on elephant seals on the beaches in March and April, so we didn’t see this when we were there.  We were still lucky to be exploring and learning about the other wildlife of Patagonia and to learn from the researchers on the Valdes Peninsula.

Heirs To Our Oceans is immensely grateful to Lindsey Kruse who kindly offered the opportunity to Heirs to be included in this wild and educational excursion, to Dr. Joe Gaydos, Dr. Marcella Uhart and Dr. Ingrid Visser for sharing their knowledge and time with the Heirs present during their orca research work, and to Juan Copello and Estancia La Ernestina for providing such great care, nourishment and experiences for the Heirs during their stay at what became a home away from home.

Also, we are greatly thankful to our donors. Through your donations indigenous youth have opportunities such as these to further inspire them as they process their futures and develop empowerment skills and confidences. 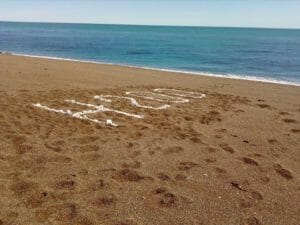